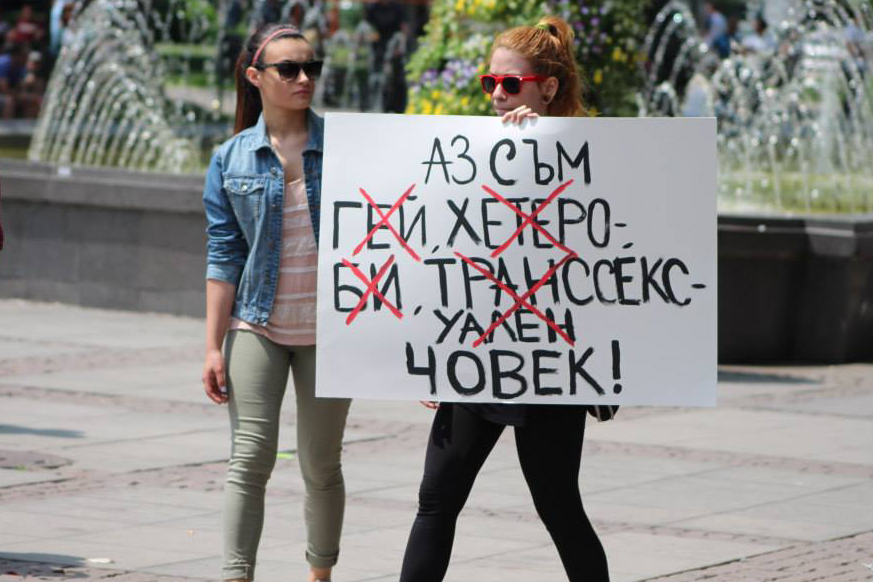 When it comes to the organizing of lesbian, bisexual and queer women’s and non-binary people’s 1 — This report uses the term “LBQ” to refer to sexual identity; this framing is inclusive of lesbian, bisexual, and/or queer women (cis or trans) and/or all non-binary people on the gender spectrum who identify as LBQ. Please see the discussion “On terminology” included in Chapter 1. movements and their funding needs, donors must see two realities at once.

These two statements capture the extent of the marginalization and hostility that LBQ people face, as well as the hope and potential of the growing movement of LBQ groups that are visionary, creative, strategic, and resilient.

Resourcing for LBQ organizing has failed to keep pace with the needs and the capacities of LBQ groups and movements that are operating in increasingly hostile and violent contexts.

This report, Vibrant Yet Under-Resourced: The State of Lesbian, Bisexual, and Queer Movements, presents a compelling picture of the current lack of resourcing for LBQ communities and makes a powerful case for why increased and more effective funding is urgently needed.

Lesbian, bisexual, and queer (LBQ) groups are doing groundbreaking work. Activists are working at the intersections of gender, sexuality, race, class, and disability to challenge systemic oppression while also building knowledge among LBQ communities on holistic security, self- and collective care, social norm change, and legal and policy advocacy. Under often hostile conditions, LBQ groups are working with focus and determination to build the visibility of LBQ people by creating feminist art and cultural spaces, organizing their communities, and building awareness of LBQ people and their human rights.

With historical roots in women’s and gay rights movements, as well as other social justice movements, autonomous LBQ organizing has grown significantly in the last twenty years, often in reaction to sexism in mixed LGBTQI groups and homophobia in women’s groups, and also because LBQ agendas are distinct and need focused attention. LBQ women and non-binary people confront misogyny, homophobia, and heteronormativity; those facing multiple oppressions contend with racial and economic injustices as well. These power dynamics and social norms expose them to a unique set of human rights violations, including particular risks of violence, especially violence within the family, and discrimination in accessing education, health care, housing, and employment.

While their efforts are critical to advancing the well-being of LBQ people and achieving multiple social justice agendas, LBQ groups struggle to access funding. Despite unprecedented momentum in philanthropy to create resourcing pipelines for grassroots movements, resources for LBQ groups are inadequate and have not kept pace with the innovative ways in which they are organizing.

Findings from the activist survey

Findings from the activist survey

Based on a mixed-methods approach, this report presents findings from surveys conducted in 2018 with 378 LBQ groups from all regions of the world and 67 donors, including public and private foundations, as well as follow-up interviews resulting in four case studies of LBQ groups.

Following are the key findings that showcase why increased funding to LBQ groups is worthwhile, necessary, and urgent. 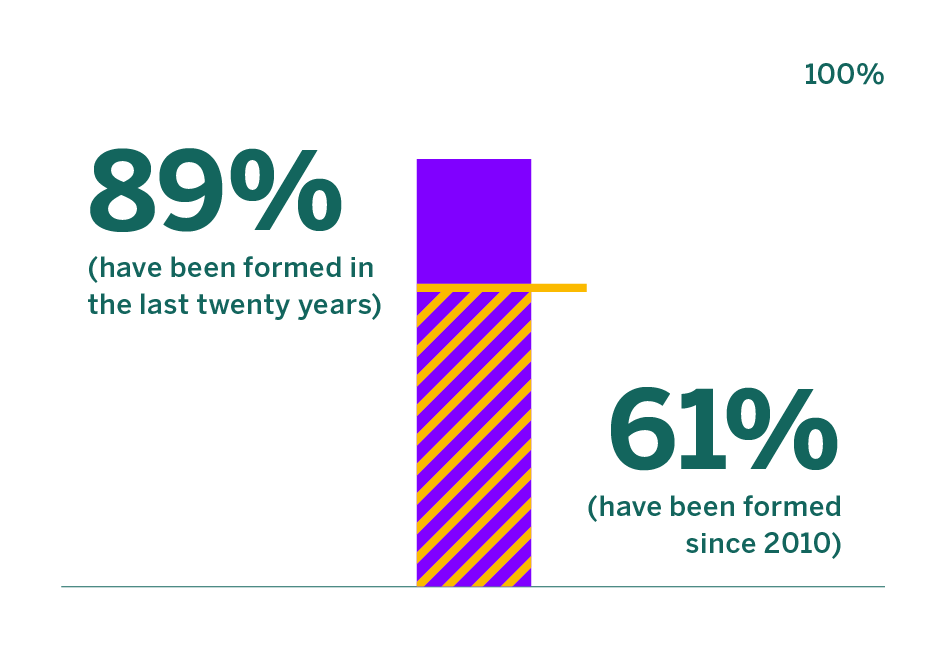 LBQ groups tie their communities’ well-being to a range of social justice issues. They identify strongly with lesbian, gay, bisexual, trans, and intersex movements and women’s rights movements, but more than half (53%) of LBQ groups also work with other types of communities and on other issues such as the right to health (32%), young people’s rights (26%), and sex workers’ rights (20%). In doing so, they elevate the needs of LBQ communities, bring LBQ leadership to diverse movements, and contribute to progress on multiple social issues. 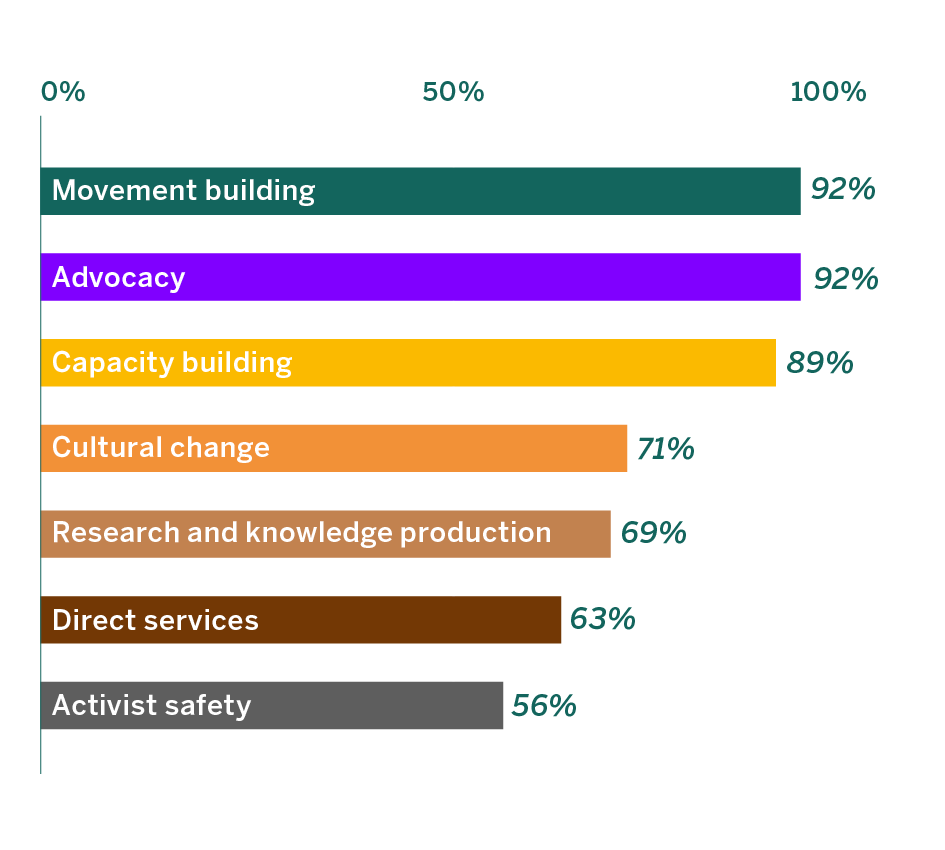 An overwhelming majority (around 90%) of LBQ groups use movement building, advocacy, and capacity building as key strategies in their activism. Close to three-quarters (71%) use cultural change strategies, including creating media and art, preserving LBQ history, and addressing the restrictive cultural norms that underpin the oppression they face, and more than two-thirds (69%) engage in research and knowledge production to fill major information gaps about LBQ people and their experiences.

LBQ groups also provide life-saving support to their own communities, addressing the violence and trauma they experience. Nearly two-thirds (63%) offer direct health and social services, as well as mental health and wellness support to LBQ communities, and more than half (56%) use safety-related strategies in their work. 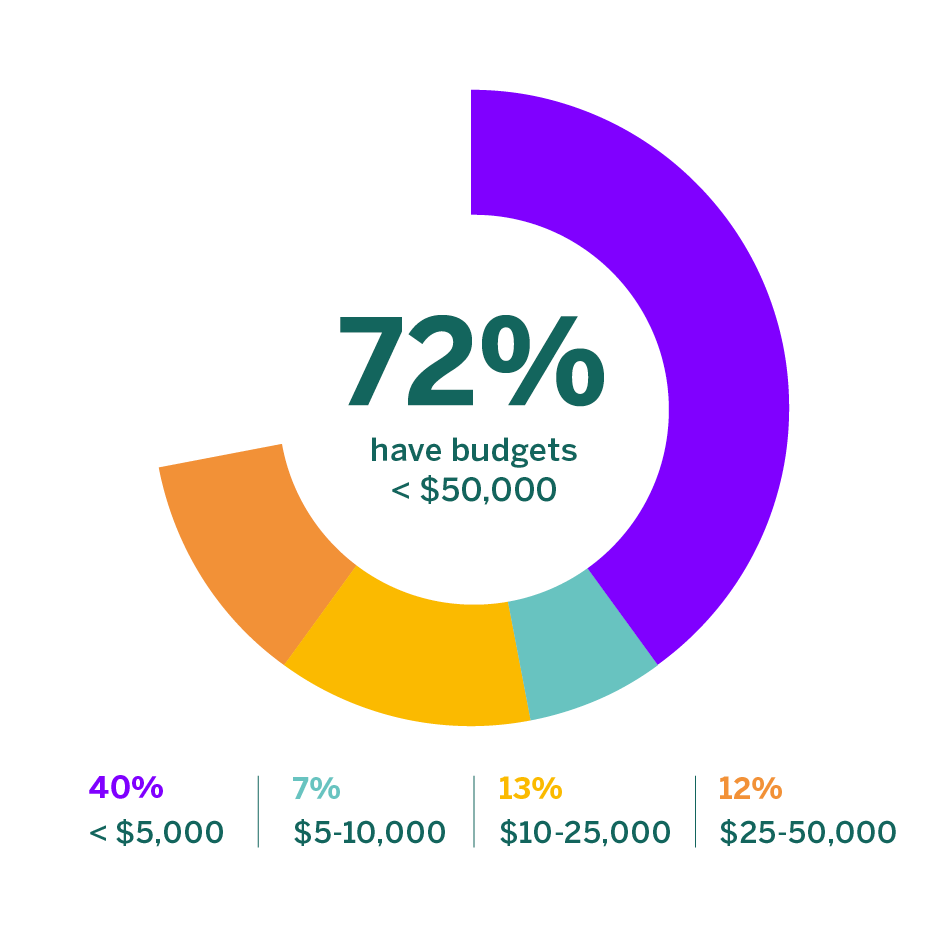 One-third (34%) of groups received no external funding 2 — External funding was inclusive of government and foundation funding and excluded membership fees, community fundraisers, events, and individual contributions from founders and their family members. , and for nearly half (48%) of all groups, external funding did not exceed $5,000.

The majority of LBQ groups have few, if any, paid staff and are heavily reliant on volunteers. One-quarter of all groups have no full-time staff (28%), and another 25% have just one or two staff full-time members.

Groups are working under precarious conditions with little protection or recourse in times of financial crisis. Approaching three-quarters (70%) of LBQ groups have no savings, and about a quarter (27%) have no assets. Among those that do, most are assets that quickly depreciate (e.g., computers, office equipment). Given the substantial financial insecurities LBQ groups face, if they lose funding, they may be forced to dissolve or resort to other work to sustain themselves.

Fewer than one in four groups using advocacy, community and movement building, and capacity building — the three most common strategies — reported receiving sufficient funds for their planned activities. Other strategies critical to the visibility and well-being of LBQ groups receive even less attention: despite two-thirds of LBQ groups prioritizing these areas of work, fewer than half (44%) of donors funded research and knowledge production, while direct services, including for mental health, was funded by the fewest donors (32%).

The barriers to funding that LBQ groups most frequently reported included: a lack of requests for proposals reflecting their priorities and strategies, requirements to present a successful fundraising track record, a lack of donor response to their queries, and delays in payments once funding is awarded. 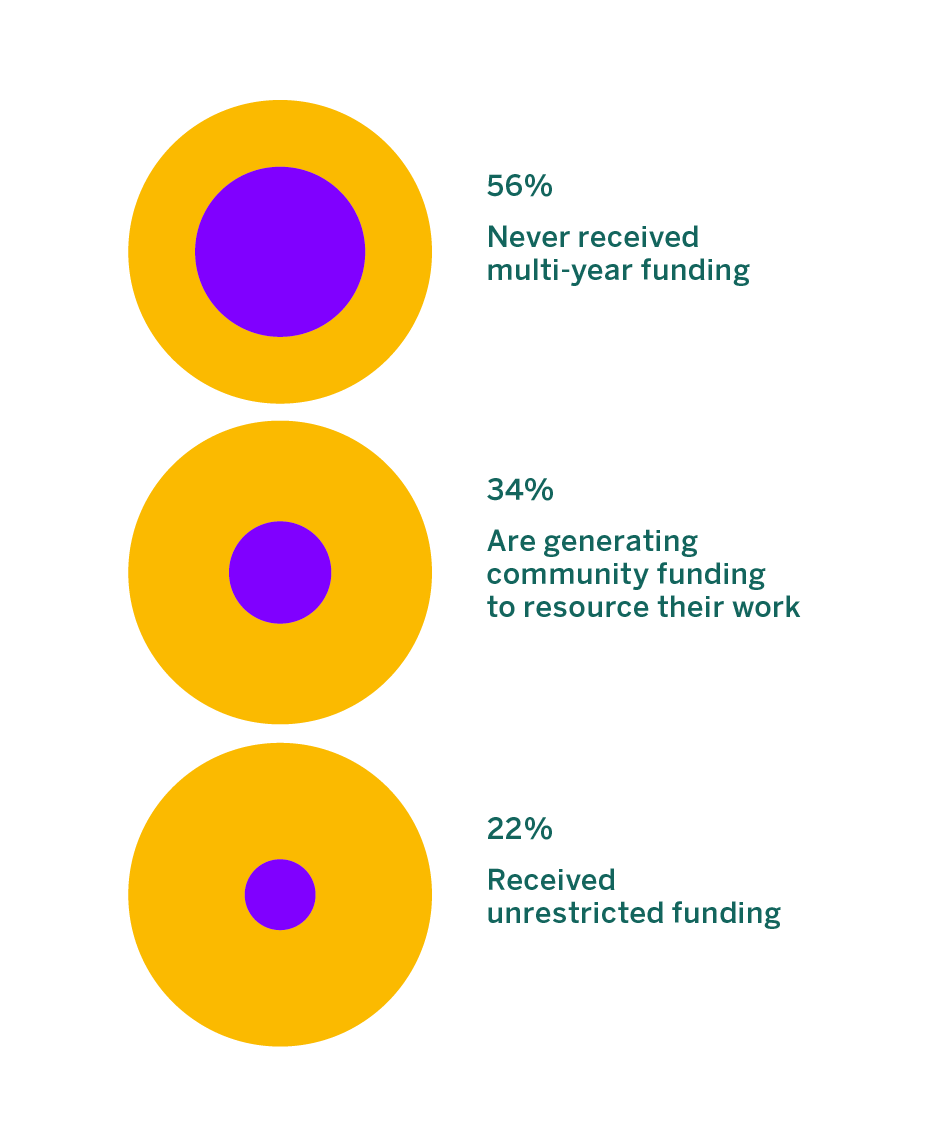 More than half (56%) of LBQ groups have never received multi-year funding and less than a quarter (22%) received unrestricted funding, hampering their ability to do long-term and self-directed work. A third (34%) of LBQ groups are generating community funding to resource their work.

FINDINGS FROM the DONOR SURVEY

FINDINGS FROM the DONOR SURVEY

Following are key findings that showcase how improved grantmaking strategies and practices could increase support to LBQ groups.

Overall, the findings suggest a vibrant and growing area of activism in urgent need of greater and better quality resourcing. LBQ groups around the world are working to address some of the most pressing challenges facing oppressed communities and struggle to access the resourcing that will make their work sustainable. Their growing activism presents an important opportunity for donors to adjust funding strategies to ensure that they meet the needs and priorities of LBQ groups.

Eighty-five percent of donors were interested in funding activism across multiple issue areas but more than half (57%) of LBQ-specific funding comes from LGBTQI portfolios. Indeed, LBQ groups report most often receiving LGBTQI funding (82%). When they applied for funding in other thematic areas, such as racial justice, economic justice, or youth and children’s rights, they were much less successful, despite the important intersections with these issues.

Donors report providing their grantees with networking opportunities (88%), capacity building on programmatic and strategy development (46%), fundraising and grant-writing (44%), and monitoring and evaluation (39%). However, only 10-12% of LBQ groups reported receiving non-financial support in these areas. Organizational strengthening priorities for LBQ groups include introductions to potential donors and capacity building support for program and strategy development, fundraising, and monitoring and evaluation.

Half of the foundation donors surveyed anticipated an increase in their LBQ-specific funding in the next two years, which may be a result of the growing visibility and momentum of LBQ activism globally. This presents a compelling opportunity to align new resources with the priorities and strategies of LBQ groups and to significantly bolster their critical movement work.

Increase funding for LBQ communities and direct it to LBQ groups.

Dedicate new funding for LBQ issues and direct it to LBQ-led groups, especially those based outside of North America.

Simplify application requirements. Partner with public foundations, women’s funds, and intermediaries that have the capacity and expertise to support small and/or unregistered LBQ groups.

Improve the quality of funding for LBQ groups

Provide flexible and unrestricted funding that allows LBQ groups to pursue their own agendas. Build multi-year partnerships that allow LBQ groups to do long-term strategic work.

Invest in research and knowledge production and service provision, two priorities of LBQ groups that are particularly under-funded.

Investing in research and knowledge production will bolster advocacy and movement-building. Supporting direct services, including mental health and wellness, is critical for the well-being and sustainability of LBQ organizers and movements.

Increase non-financial support to LBQ groups and ensure it meets their needs.

Make dedicated efforts to invest in the organizational capacity building of LBQ groups and to connect them with new donors, contributing to their sustainability and resilience.

For donors without LBQ-specific portfolios, ensure that funding intended to be LBQ-inclusive actually reaches LBQ communities.

Develop specific and measurable strategies to ensure funding actually reaches LBQ communities. For example, ask non-LBQ-specific grantees about the strategies they use to reach LBQ people, their track record in promoting the rights of LBQ people, or how many people in their leadership identify as LBQ.

There are meaningful opportunities for women’s rights and gender equality donors to increase support for LBQ groups; donors who focus on sexual and reproductive health and rights, HIV and AIDS, young people, sex workers, and other issues and constituencies should also consider how LBQ groups fit into their portfolios.