What is the financial situation of LBQ groups? 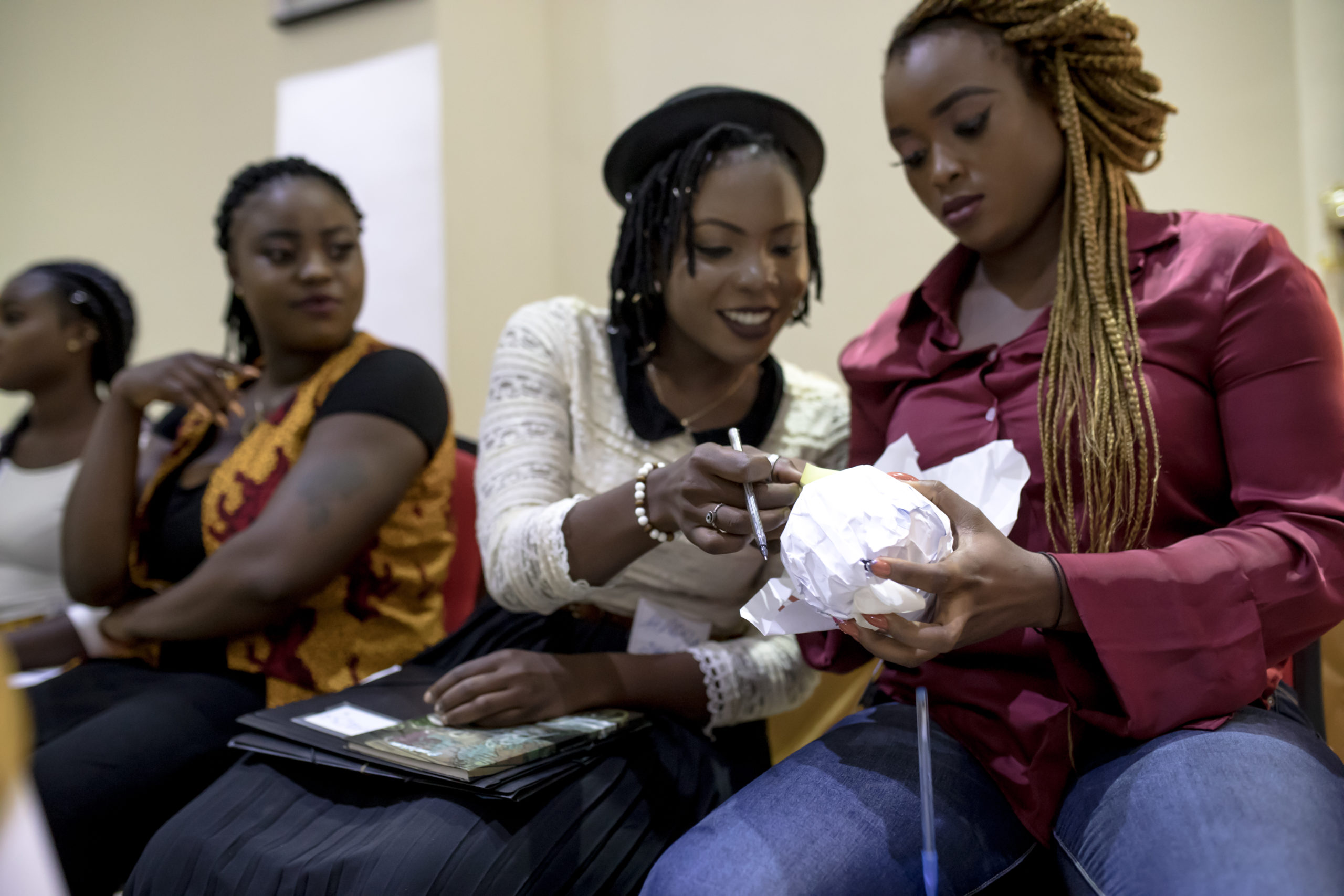 What is the financial situation of LBQ groups?

This chapter reviews the budgets of LBQ groups and the funding they receive. It describes LBQ groups’ sources, duration, and type of funding, the barriers LBQ groups face in accessing funds, and the safety nets available to them.

In understanding groups’ access to funding, the political or ethical acceptability of funding sources is also an important consideration, particularly among groups with histories of autonomous feminist organizing. LBQ organizing is intersectional and political, and in deciding what money to seek out or accept, groups’ choices may be informed by donor alignment with the perspectives and approaches that groups value and prioritize. 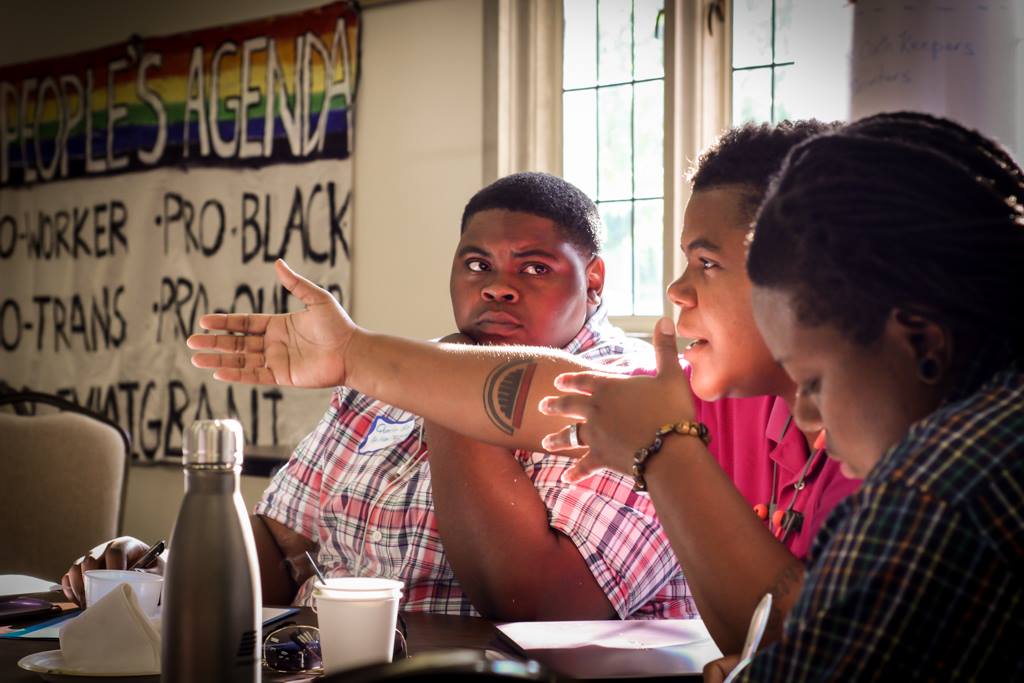 In discussing the budget 45 — All financial data is reported in US dollars. OANDA Currency Converter was used to convert currencies into US dollars. The exchange rate was based on the date of survey completion. sizes of groups, the following categories are referenced in this chapter and throughout the rest of the report: 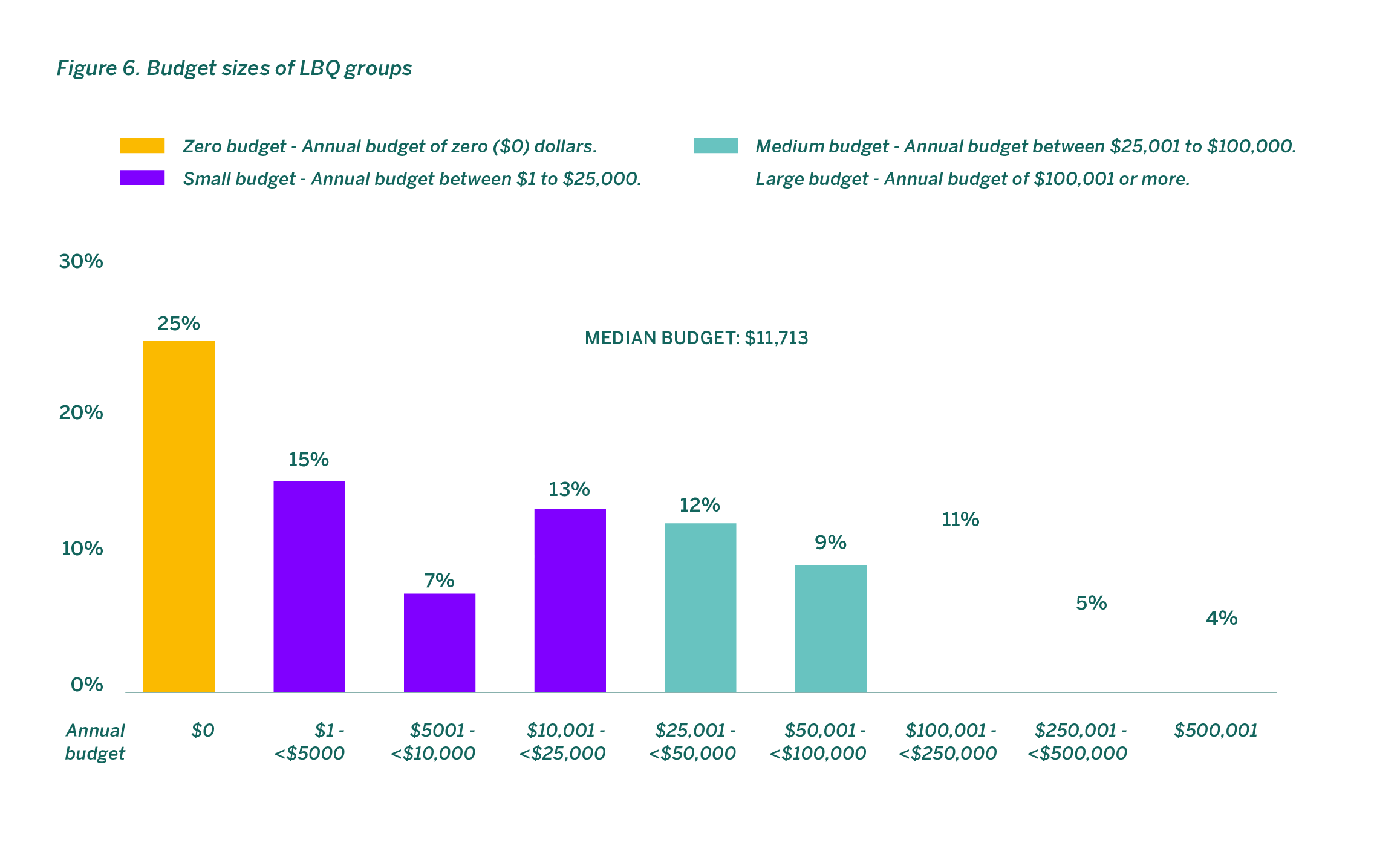 LBQ groups have very small budgets and, in most regions, limited access to external funding. 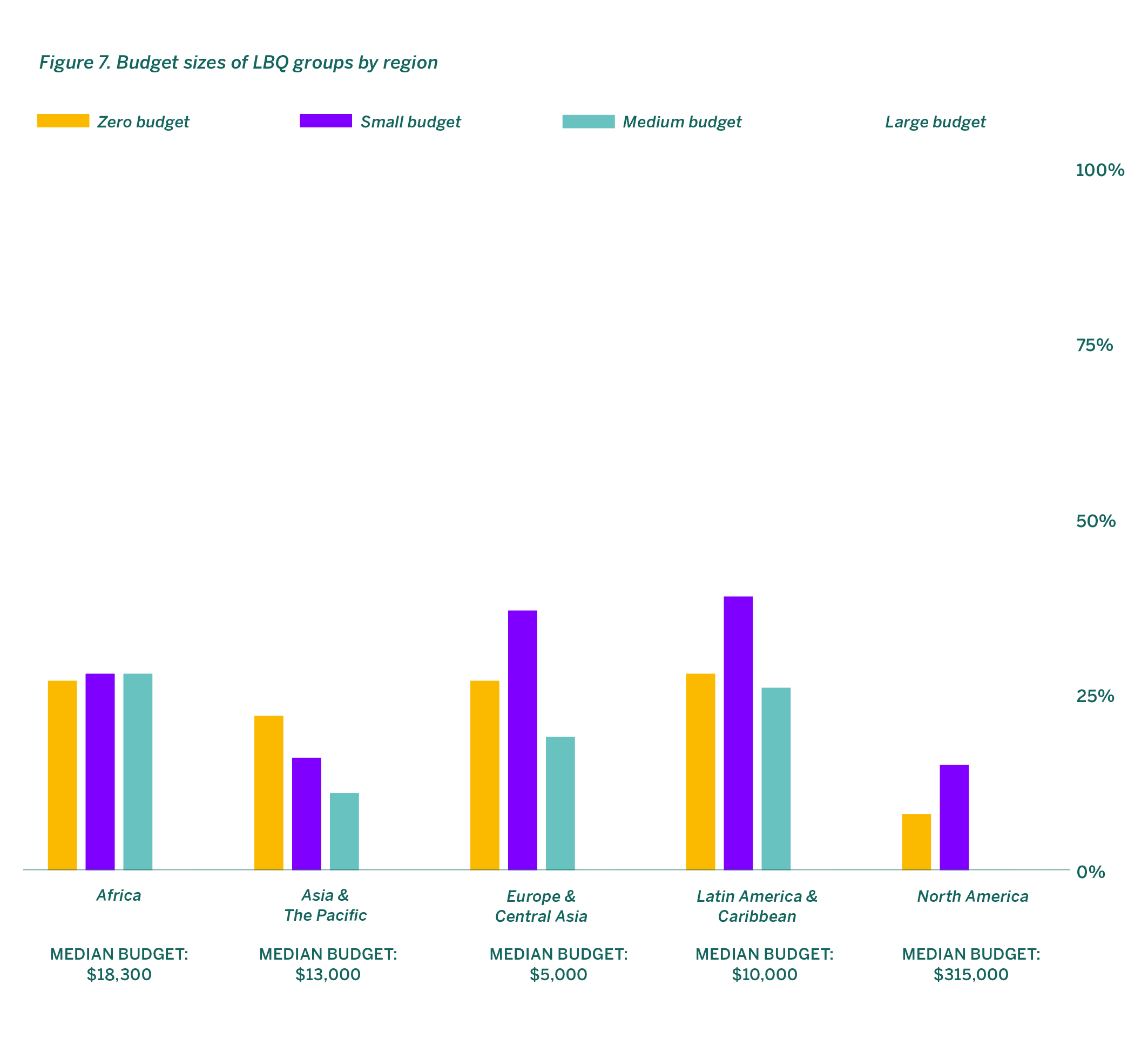 The data show that money is heavily concentrated in North America, where the median annual budget is $315,000. By contrast, in no other region does the median budget even reach $20,000 annually. LBQ groups in Europe and Central Asia have the smallest median budgets, at $5,000, and groups from across the region are struggling. Nearly half (43%) of LBQ groups in Eastern Europe and Central Asia operate on less than $5,000 annually, and in Western Europe, just over half (53%) work with less than $5,000 per year. Additionally, at the global level, younger LBQ groups tend to work with zero or small annual budgets: 83% of groups with zero budgets and 70% of groups with small budgets were formed since 2010.

In addition to asking respondents about their group’s annual budget, we also asked how much external funding the group received in 2017. “External funding” was defined as “including government and foundation funding and excluding membership fees, community fundraisers, events, and individual contributions from founders or their family members.” (Note: in some cases groups that reported a zero annual budget also reported receiving some, usually modest, external funding.) The data shows that LBQ groups overall received very little external funding, if any (n for this question = 265). 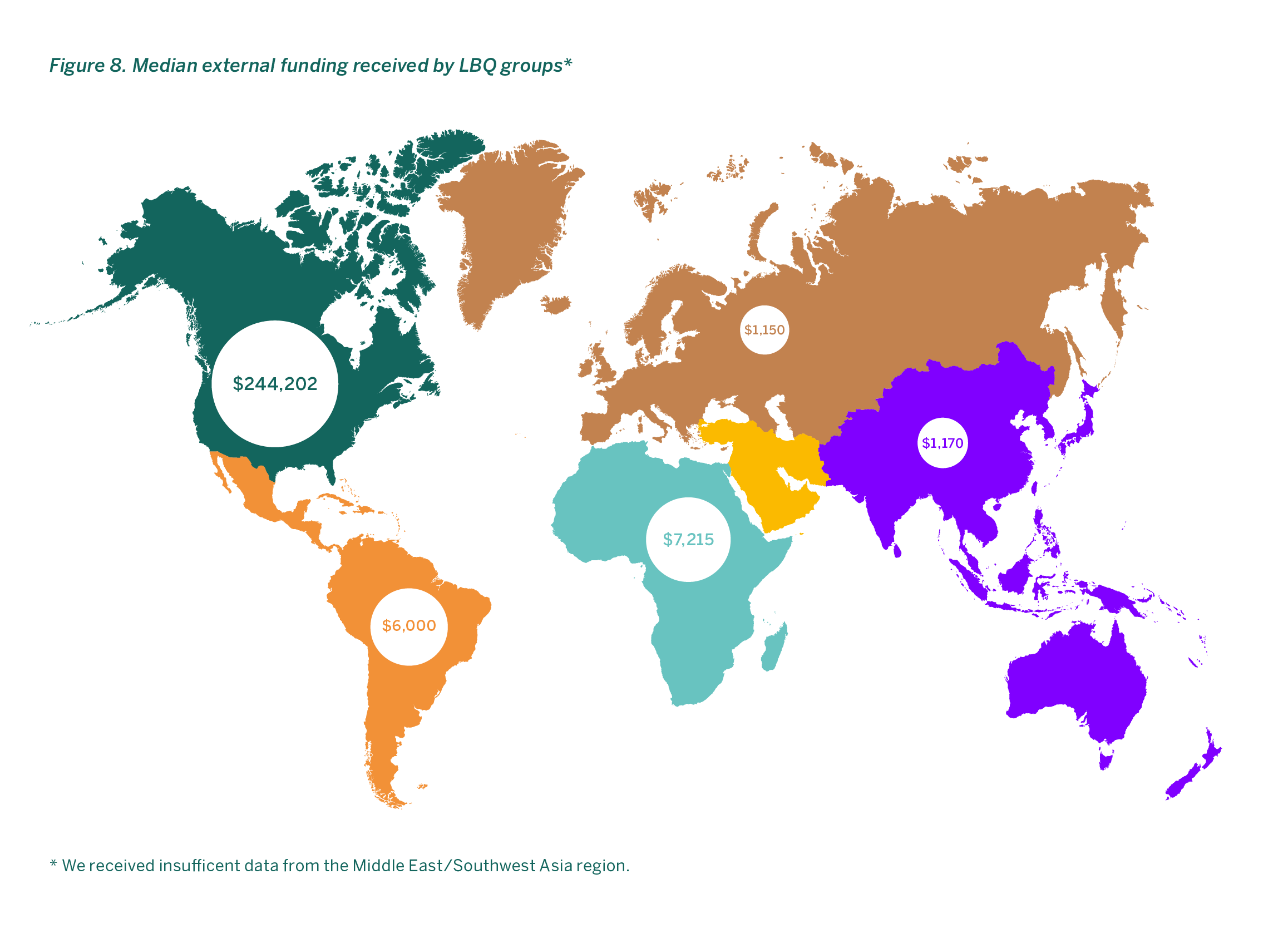 Duration and type of funding

LBQ groups rely on short-term and restricted funding to do their work.

Long-term funding is critical for sustainable organizing. In 2017, 29% of LBQ activists reported receiving funding lasting 1-2 years; 20% had received funding of less than one year, and only 5% had received funding that lasted 2-4 years. Overall, more than half (56%) of LBQ groups have never received multi-year funding (n responding to this question = 216); never having received multi-year funding was particularly common in Europe and Central Asia (69%) and Africa (66%). 46 — Multi-year funding was defined as an awarded grant lasting a minimum of two years. 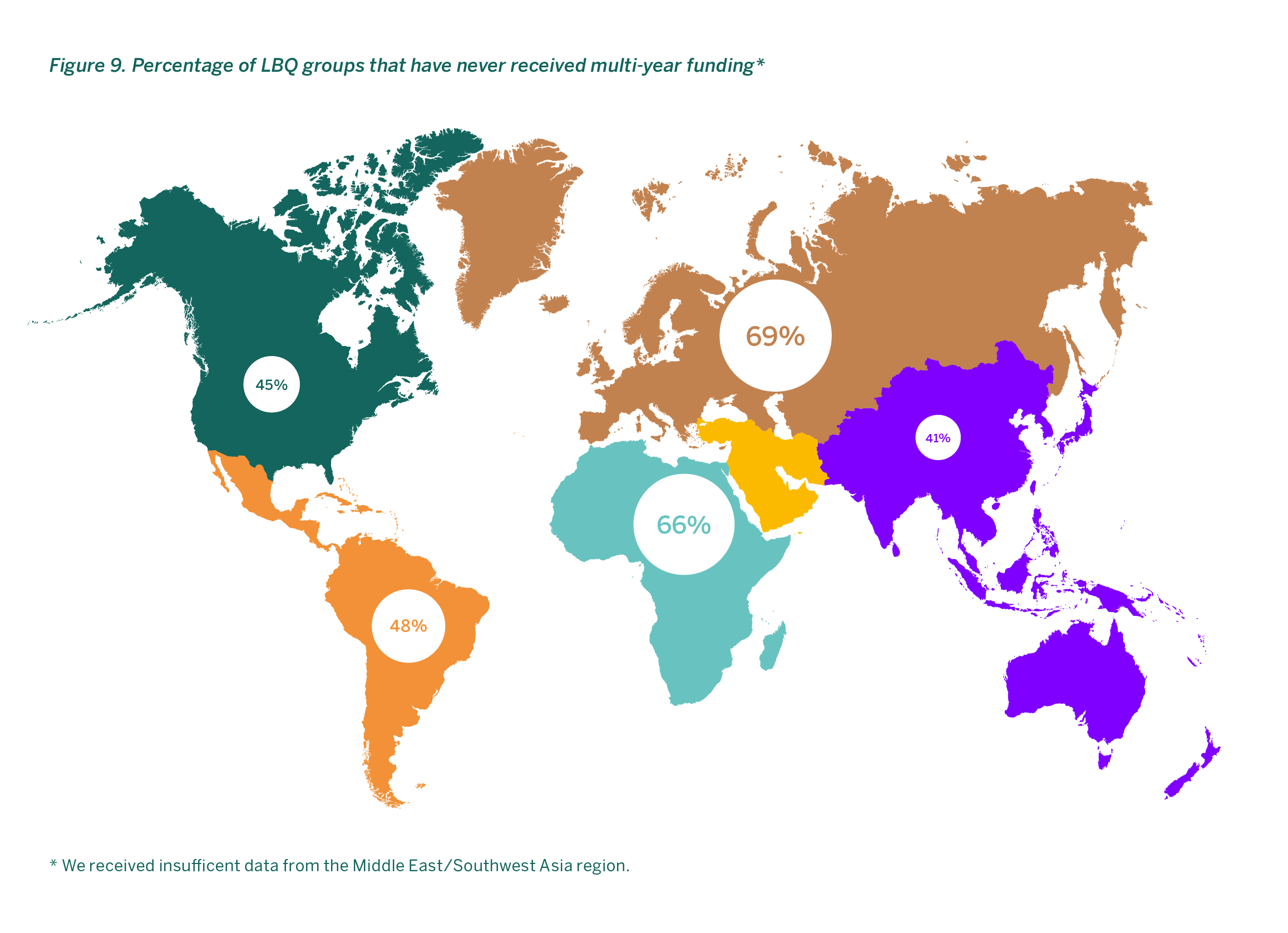 Foundations and community-generated sources are the most common sources of funding for LBQ groups.

Forty-one percent of LBQ groups received funding from foundations and intermediaries 47 — The category of foundations and intermediaries includes public and private foundations, LGBTQI funds, women’s funds, and subgrants from non-governmental organizations. in 2017, the most often cited source of funding for LBQ groups. 48 — To gauge the variety and availability of funding sources for LBQ groups, respondents were asked to select all their funding sources in 2017. To capture the breadth of donor types, some over- lapping categories were included, such as, for example, LGBTQI funds which could be both public or private foundations. Community-generated sources 49 — Community-generated funding sources include crowdfunding, community fundraisers, membership fees, income-generating activities, and individual donors. are also a critical source of support for LBQ groups, with a third (34%) receiving some form of community-generated funding. Individual donors, one of the sub-categories included in community-generated funding, are particularly important for groups with medium budgets (25% receive individual donor funding) and large budgets (41% receive individual donor funding). Very few LBQ groups (5%) were able to or chose to access corporate funding. 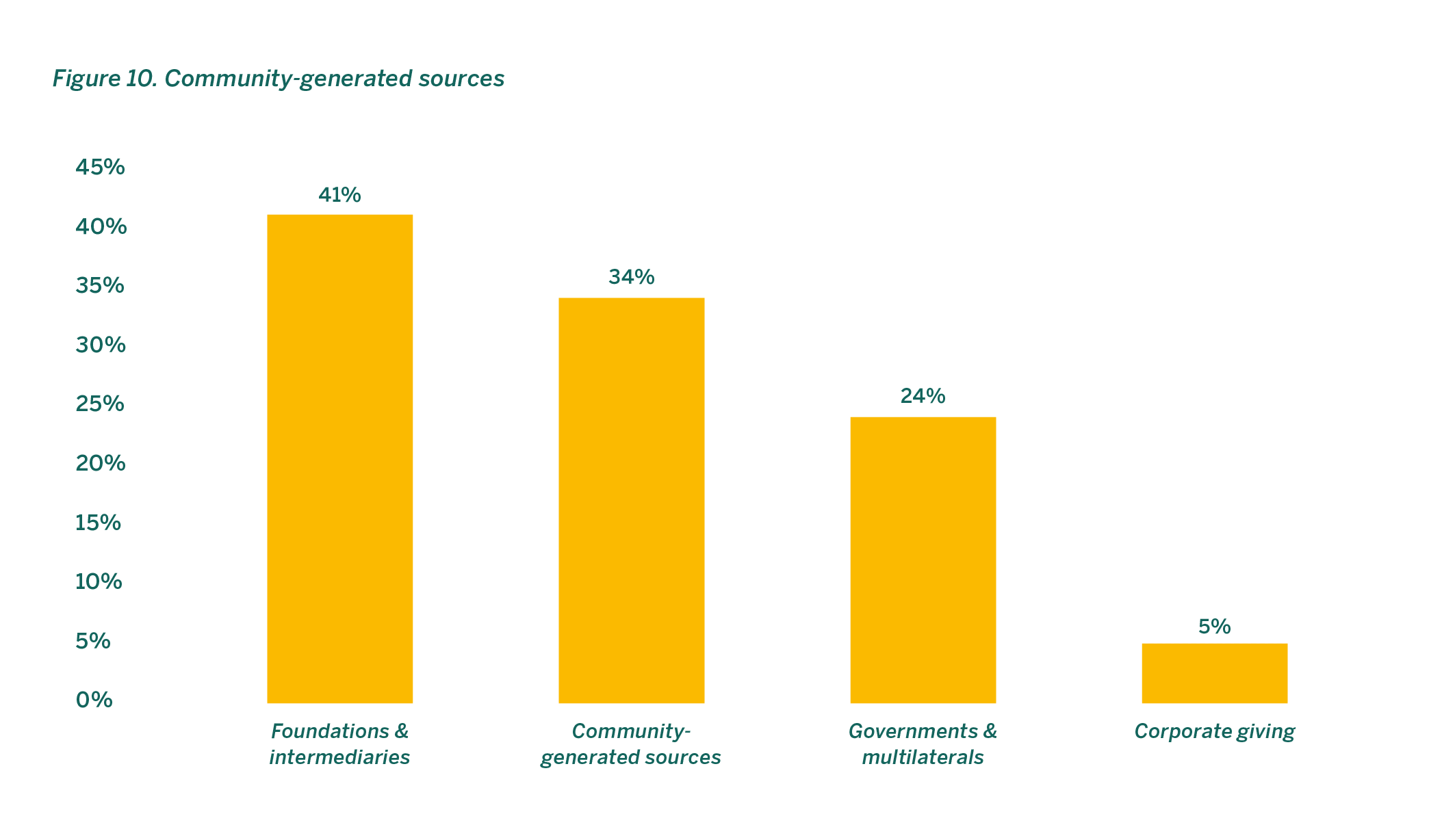 Only a quarter (24%) of all LBQ groups received any type of government funding 50 — The category of government funding includes multilaterals, as well as respondent’s own national, state, and municipal level governments, or the government or embassy of a foreign government. and it is rare for LBQ groups of any budget size and in almost all regions. No more than 11%, and often much less, of LBQ groups in Europe and Central Asia, Latin America and the Carribean, Asia and the Pacific, and Africa received funding from any individual government source. LBQ groups based in North America fared better: 20% reported receiving state and federal funding. Groups in North America also accessed the broadest range of funding sources overall, including from LGBTQI funds, individual donors, private foundations, community fundraisers, and income-generating activities. 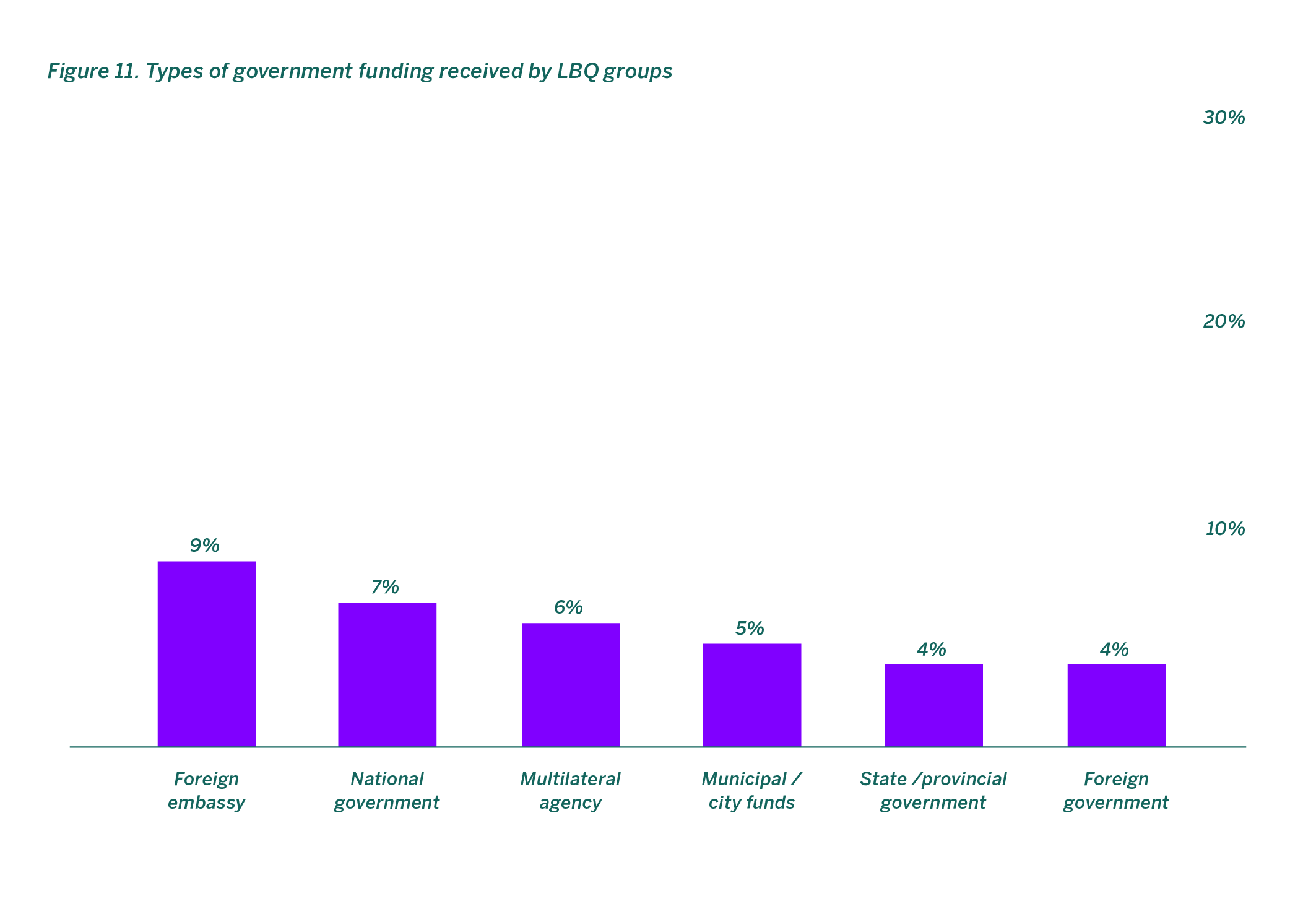 In finding potential donors, 31% of groups identified a lack of requests for proposals that expressed interest in supporting their priorities or strategies as an obstacle. The most frequent barriers to applying for funding were an insufficient funding history and a lack of responses to inquiries made by the group (both mentioned by 17% of respondents), followed closely by not being registered, not having audited financial statements, and onerous applications (each mentioned by 15%). Nearly a quarter (22%) of LBQ groups experienced no problems when trying to implement external funding once it had been awarded, but 15% experienced long delays before receiving payments. 51 — Respondents were asked to select all the barriers they faced in finding, applying, and implementing external funding. 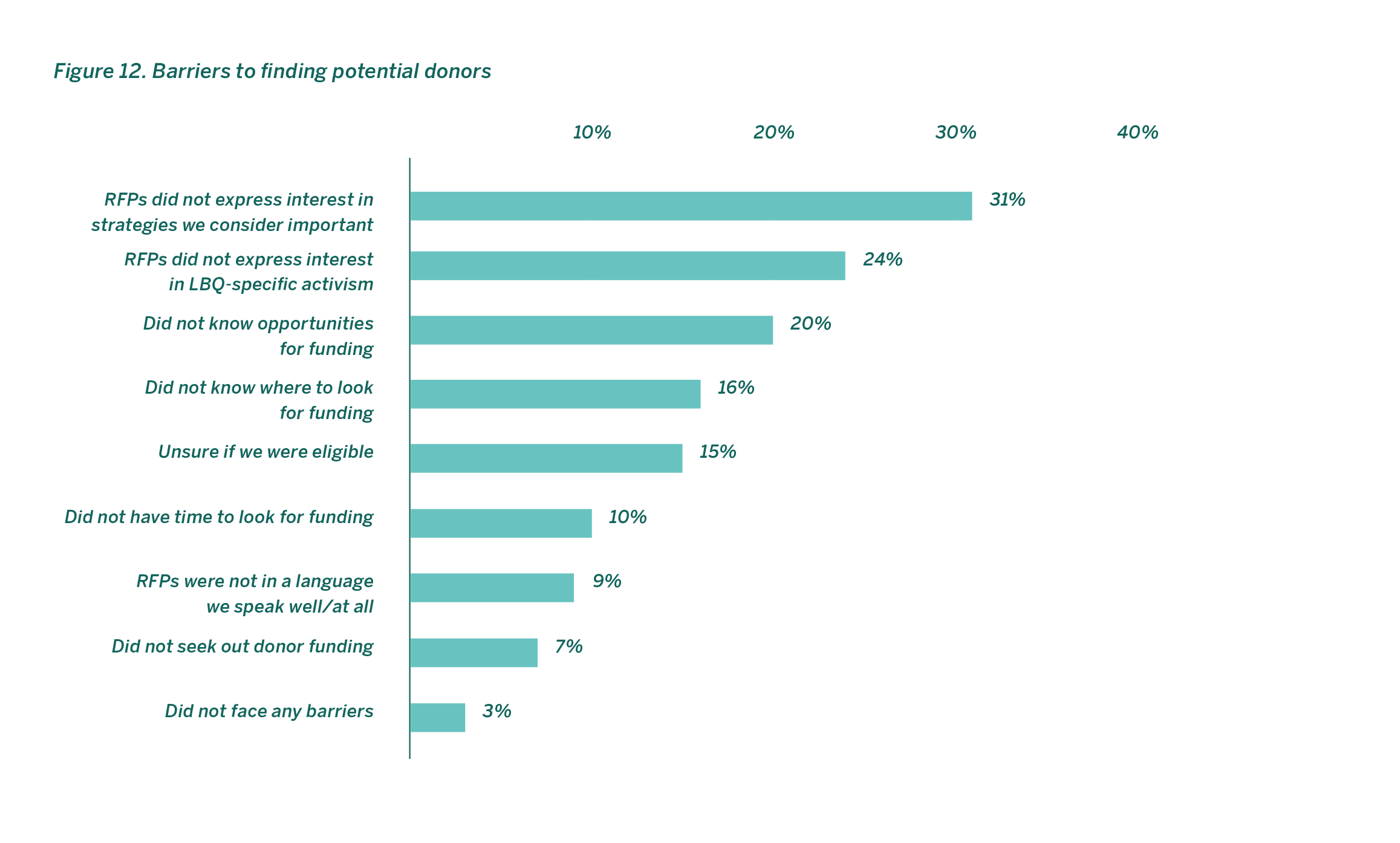 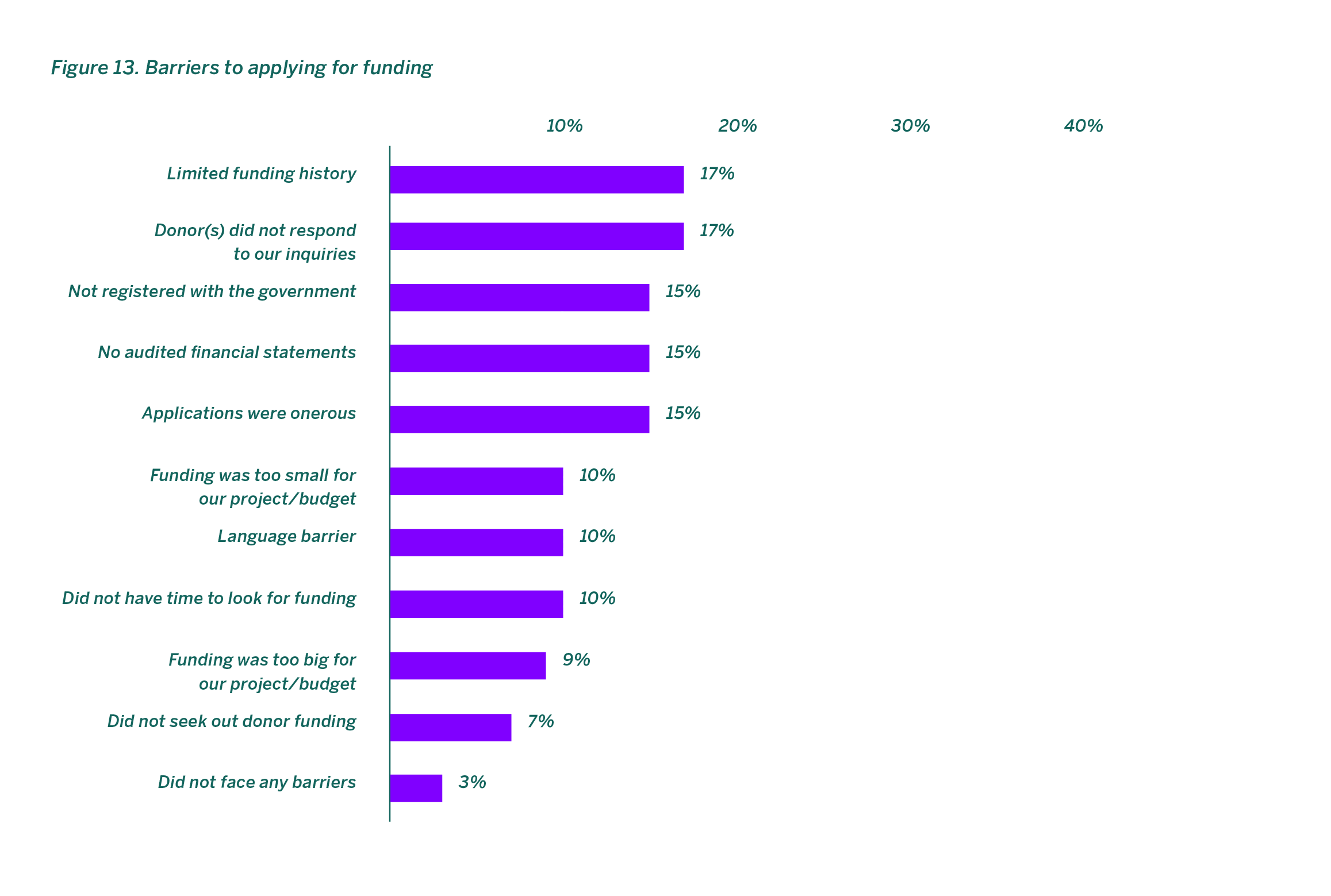 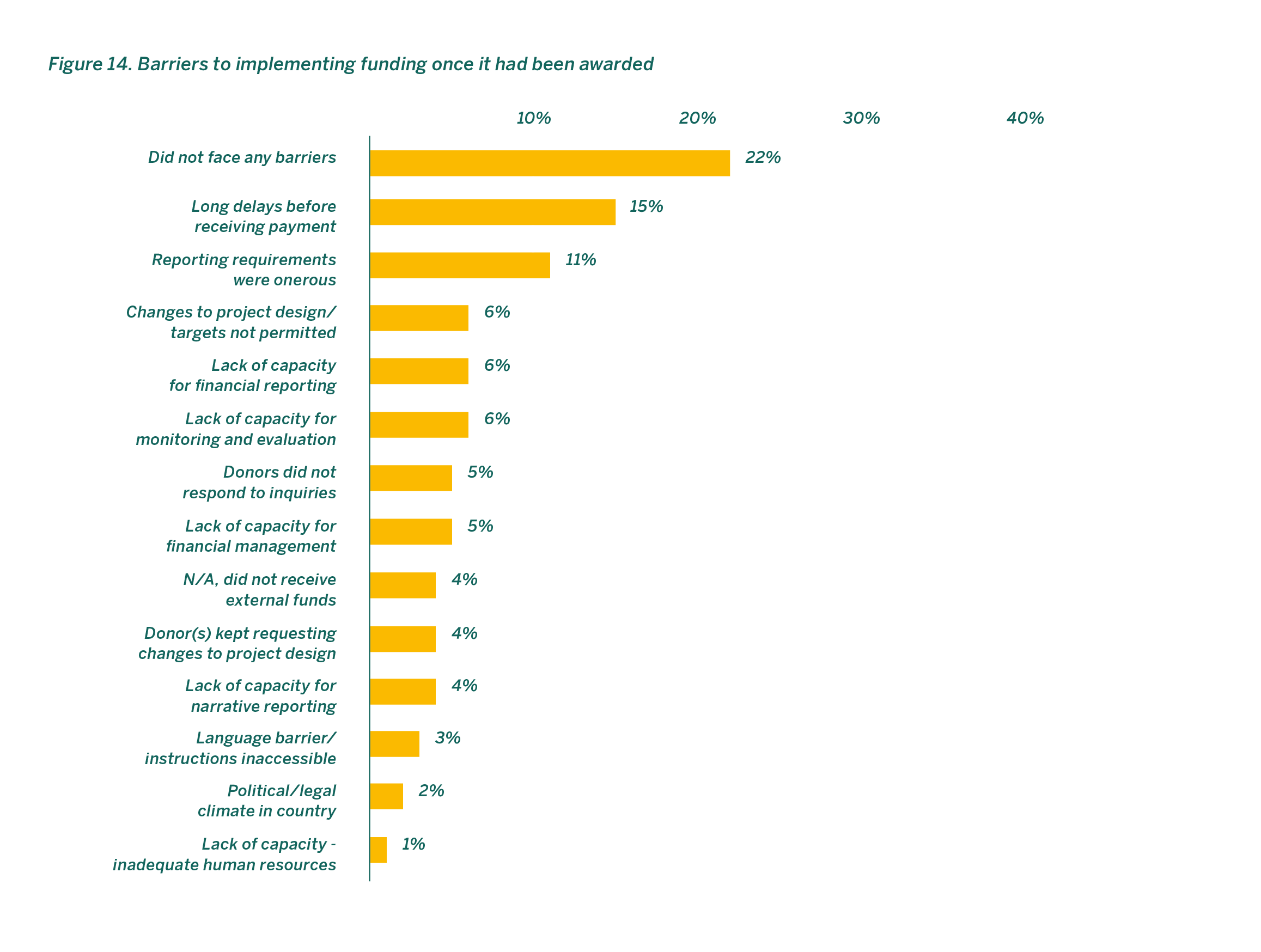 Most LBQ groups have no savings or assets to rely on if fundraising fails.

Examining the savings and assets of LBQ groups is important because it gives an indication about the financial health and stability of LBQ groups and the ability of the group to weather fundraising setbacks. The data show that for most LBQ groups, financial insecurity is the norm. Groups are working under precarious conditions that offer little in the way of protection or recourse in times of financial crisis.

Nearly three-quarters (70%) of LBQ groups have no savings (n for this question = 250). More than half of all groups in the sample (52%) anticipated that they would continue to work on a voluntary basis if their group ran out of money. More than a quarter (27%) also had no assets in 2017 and among those that did, most were assets that quickly depreciate, such as equipment, like computers (36%) and furniture (20%). 52 — Respondents were asked to select all assets that they owned. These assets include anything of value that could be converted into cash in the future. It only referred to assets owned by the group and not by individual staff members or volunteers. The near universal lack of property ownership (3%) makes LBQ groups vulnerable to the whims of landlords, including rent increases and evictions. Given the substantial financial insecurities LBQ groups face, a financial crisis or fundraising failures may force groups to dissolve or resort to other work to sustain themselves. 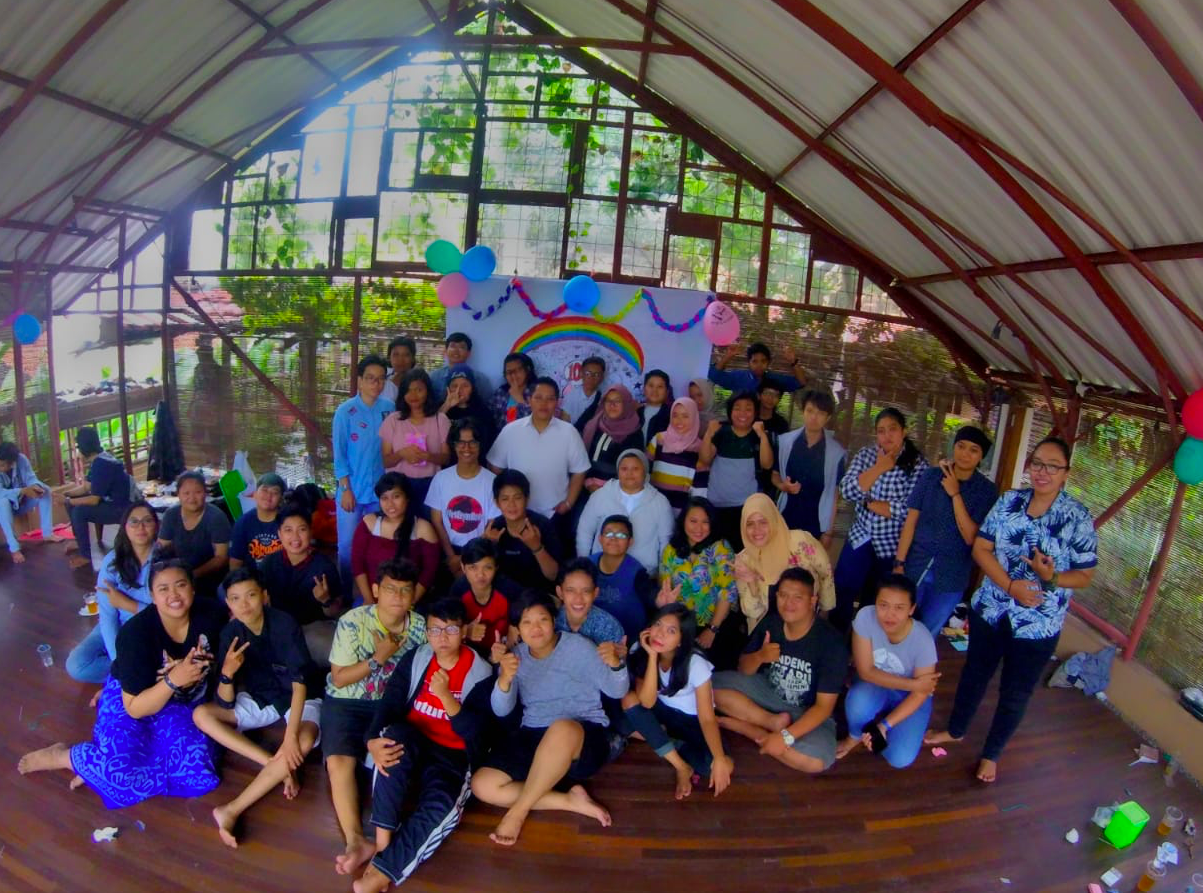 Family violence against LBTQ people in Indonesia is prevalent. LBTQ people are routinely expelled from their homes, subjected to forced marriage and marital rape, or forced to wear religious garments as a way of changing their sexual orientation. Non-binary and trans people may be forced to dress in ways that conform to society’s expectations of their perceived gender. Collaborating with and building awareness among activists and communities from different movements has been an important strategy for Talita Kum to challenge violence and promote the well-being of LBTQ people.

Mobilizing allies and building communities where LBTQ people feel supported is the foundation of Talita Kum’s work. From its early years, starting in 2009 as a volunteer collective, to the more formalized organization it has been since 2014, Talita Kum has used community organizing to create grassroots change to improve the lives of LBTQ people.

“We don’t just focus on the number of LBTQ communities reached, but also on the quality of that outreach. We want to help people acknowledge themselves and their rights as citizens of Indonesia.”

To build support for LBTQ people, Talita Kum has collaborated with women’s rights organizations to push for the inclusion of LBQ women. They also work with religious groups, leaders, and scholars to humanize LBQ people and change norms about diverse sexual identities in religious communities. But their quest for the liberation of LBTQ people starts close to home. Talita Kum names self-liberation, or coming in (the notion of “coming out” to oneself), as one of the most critical and important parts of their work. It is focused on an acknowledgement of self and pride in oneself, without fear of rejection or being seen as a sinner. To this end, the organization offers peer support and an online resource center with vlogs, live-stream workshops, and articles to provide access to affirming resources. These types of services not only contribute to the health and well-being of their constituency, but also allow them to reach more people and serve as a launchpad to broader conversations about sexuality, consent, sexual pleasure, identity, and human rights.

Talita Kum initially began as a volunteer-based collective and has struggled at times to secure funding. Their experiences with resourcing their work run the gamut, from members using their own money to fund activities to receiving unrestricted funding for short periods. However, they most commonly receive project-based funding. Between 2016-2017, the organization received no funding and used its budget reserves from the previous fiscal year. This allowed them to carry forward with organizational activities, but the reserves were not sufficient to cover any institutional costs, such as salaries and rent. Members of Talita Kum’s Executive Board have other jobs to supplement whatever salary Talita Kum is able to provide — typically very little given the limited general support the organization receives.

Most donors tend to fund national organizations based in Jakarta, so organizations such as Talita Kum that are based outside of the capital or don’t have connections to Jakarta-based national organizations have limited access to funding. Many of the organizations that are funded are also able to produce audited statements, which Talita Kum is having done for the first time in 2019. For the upcoming year, the organization is keen to earmark funds for health insurance and for the self care and personal well-being of its community organizers but has not found any donors interested in supporting this (although the group has been able to use their limited core funding for these needs in the past).